The RapidRatings Annual U.S. Default Study examined bankruptcy trends from public, non-financial U.S. companies, looking specifically at their Financial Health Rating (FHR®) at the time of and leading up to default.

The FHR, a predictive indicator of financial stability, ranges from 0-100 and is broken into 5 risk categories, from Very High Risk to Very Low Risk. Companies with lower FHRs have higher probabilities of default, and vice versa.

Over the 5-year period from 2012 through 2016, 277 companies in this cohort defaulted or filed for bankruptcy. Of these 277 defaults, 25% of them occurred in 2016 – a 13% increase from 2015.  The average FHRs observed at the time of filing, 12 months prior, and 36 months prior to bankruptcy were 25, 33, and 43, respectively.  This trend highlights the FHR’s effectiveness in providing early warning of financial deterioration.  The 12 month window allows companies sufficient time to take risk mitigation action.

For a closer look at the findings, download the 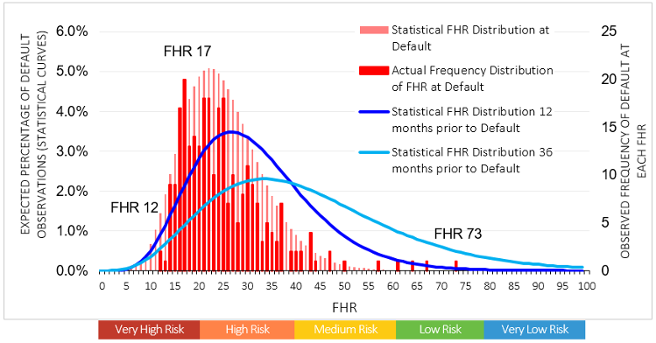 Using the FHR to Separate Defaulters from the Financially Healthy

Cumulative Proportion of the U.S. Coverage vs. 2016 Default Cohort One way to operationalize this information is to suppose there were 3,000 public, non-financial companies in the U.S.  By using financial health to identify and avoid the worst 5% of these, you would still be left with 2,850 companies with which to do business. The sacrifice is seemingly inconsequential. However, by avoiding the bottom 5%, you would have avoided two thirds of all 2016’s defaults, averted potential disruptions to your business and created workflow efficiency for your internal resources and their own analytical efforts.

For an overview of the mid-year numbers read the